The study of microscopic organisms left a big impact on Menusha Arumugam this summer.

The UM-Flint senior spent much of her summer studying tiny worms for biology research in New York City. She landed a research spot at a Columbia University laboratory for her off-campus study work for the UM-Flint Honors Program.

For ten weeks, Arumugam learned the finer details of using scientific lab equipment by conducting behavioral observations on the microscopic worms, and learning from a university post-doctorate student and researcher.

But beyond the daily work she recently wrapped up, Arumugam sees the bigger picture. She was ready to take on the challenge, thanks to the guidance and encouragement she's received at UM-Flint.

"If I went to a bigger campus, or one that is more overwhelming, or a campus with staff and faculty who are not as supportive, I don't think I would have had the same growth as I did here," she said about her UM-Flint career, which started in the spring of 2014.

And after her experience this summer, Arumugam solidified her choice to pursue a career in biology research. 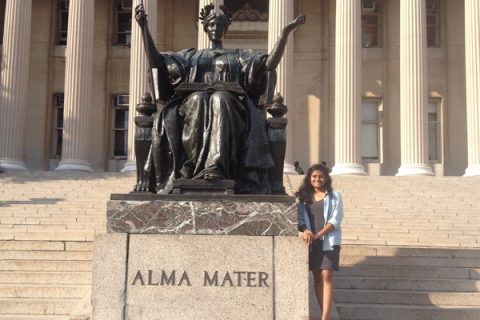 "This research experience and interacting with different people from the lab has definitely given me more confidence to pursue biology research in graduate school," she said.

Arumugam was one of nearly 30 UM-Flint Honors Program students who spent their summer conducting research with experts in their field of study. This is most often done between the junior and senior year.

Students research sites, reach out to prospective researchers, develop a grant proposal, and receive funding up to $3,000 to do research at another campus abroad or in the United States.

"They learn new lab techniques and develop a new understanding of the challenges and rewards of advanced research in their field," said Dr. Maureen Thum, director of the UM-Flint Honors Program. "It is a life changing experience. Students gain independence and broaden their horizons."

After returning, students write an honors thesis based on their research and present their findings at an undergraduate conference.

Arumugam said her UM-Flint professors, including Honors and Biology, helped her learn how to study scientific papers and analyze the material for her own papers. This was key for her work at Columbia. This work studied temporary starvation in worms, and how it impacted future generations of the worms on how they handle such withdrawals of food.

Beyond the professional work, the UM-Flint program allowed her to enjoy the cultural life of Manhattan and to meet her peers from other universities.

The opportunity summed up how she feels about UM-Flint. She is an International Ambassador through the International Center and current president of Student Government. In all cases, the staff and faculty showed faith in her, she said, which has allowed her to thrive.

"I think I made a wonderful choice coming to UM-Flint," said Arumugam, who transferred to the university in 2014 from a school in her native country of Malaysia.

And as she pursues her career, Arumugam said she hopes to influence others in ways she was influenced at UM-Flint and Columbia University.

"Eventually I would like to be a research scientist while teaching and mentoring students who aspire to be a scientist. I want other students to have the same opportunities I've had," she said.