A team from UM-Flint is traveling to Washington D.C. Thursday, July 7, to lend their mapping skills and innovative research experience to a federal government initiative.

The group, led by Professor Martin Kaufman, will detail the university's recent research, which identified and mapped all known locations of lead pipes in the city of Flint.

The White House Mapathon is expected to draw about 90 participants, including federal agency professionals, educators, students and community members. It is an event to actively participate in open mapping across the federal government, according to organizers.

The one day trip's impact will extend far beyond Thursday, Kaufman said, as officials from agencies such as the U.S. Geological Survey, Bureau of Land Management and U.S. Census Bureau will be at the event.

"The exposure garnered by the UM-Flint team presenting at the conference will literally put the university, and more specifically our department and GIS Center "on the map". We expect internships and job opportunities for our students to increase as our result in this event," Kaufman said.

But the group also will be lending its expertise on how its research can be used as a national mapping model to deal with aging infrastructures. 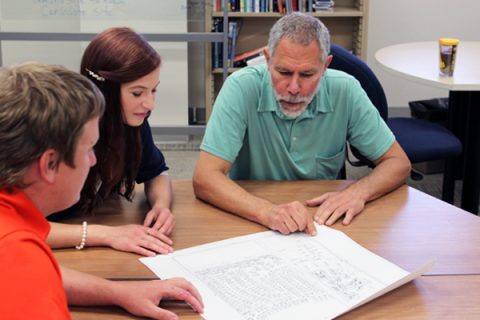 The group is presenting GIS Center research, led by Kaufman, that analyzed the city of Flint's hand-written records, paper maps, and scanned images to create a complete digital database for all the information available about lead service lines used in Flint. This information is part of the data Flint officials have used, and can use in the future, to replace pipes throughout the city.

Kaufman said he was recently contacted by a White House official, who requested UM-Flint attends the event to tell the university's research story to a national audience.

"We will discuss the technical aspects of the data compilation, and the benefits of the final product, specifically, the assistance given to the city of Flint in prioritizing which lead pipes to remove first," Kaufman said.

The event will also include groups working on current open mapping projects led by federal agencies, including one used for malaria prevention in Mozambique, and another in which remote and marginal areas across the U.S. are being mapped.

Hertlein is slated to graduate in May 2017 from UM-Flint with degrees in environmental science and planning, and energy and sustainable systems. She did not participate in the lead piping research but is working towards earning her GIS certificate.

"I'm very nervous and excited," she said about the trip. "I hope to see the inner workings of what it takes to be part of these agencies, and what these agencies are collaborating towards in an effort to better develop our mapping systems."

Kaufman said Hertlein is an excellent student and tutor, and will provide valuable skills at the open mapping project.

"We are very excited about this event, as it affords the opportunity to promote our university at the national level, and raise awareness about the problems still facing the people of Flint," he said.