UM-Flint faculty member Jan Worth-Nelson first met Ted, the man that would someday be her husband, while in Tonga serving in the Peace Corps. That was more than 30 years ago. They would reconnect in 2001, and marry in 2005. A year later, she wrote about her service in the Peace Corps in a self-published novel Night Blind.

October 15 on the Ann Arbor campus, Worth-Nelson will join other U-M alumni authors who have served in the Peace Corps, and will discuss the effect and impact that service had on their writing.

The University of Michigan will host a variety of activities starting October 1-November 9, commemorating the 50th anniversary of Sen. John F. Kennedy's Oct. 14, 1960 speech outside the Michigan Union. Kennedy that night sparked the creation of the Peace Corps when he urged students to work in developing countries to promote peace.

A website, peacecorps.umich.edu, has a complete listing of times and locations of all the anniversary celebration events on the Ann Arbor campus. A focus of the celebration will be two ceremonies Oct. 14 on the steps of the Michigan Union. The first ceremony will occur at 2 a.m., exactly 50 years after Kennedy delivered his remarks. The second ceremony will start at 11 a.m. with Ghanaian drumming followed by a number of special guest speakers. 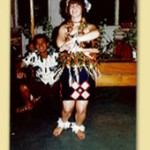 Worth-Nelson recalls that while she was in Tonga, the 10th anniversary of the Peace Corps in that country was celebrated. If there is something that surprises her these days, it is that some of her students have never heard of the Peace Corps. But for her, it was an experience she and her husband will never forget.

"Our shared Peace Corps experience was a powerful element in both our lives, and that history continues to enrich us.  The Peace Corps changed both of our lives immensely."