"This morning, it took nothing to get me up," said Jenkins-Ali, as she cleared weeds from the flower beds outside of Our Savior Lutheran Church in Flint.  "There was no coffee needed. There was no sugar needed. I thought, 'I know where I'm going, I know what I'm doing. I want to do this and I want to see people doing this with me.' I know this has been a productive day."

Jenkins-Ali was one of three dozen members of human resources leadership from UM-Flint, the Ann Arbor Campus, and the University of Michigan Health System who spent August 4 doing service work in Flint. Several UM-Flint University Outreach staff members and UM-Flint students participated in the project too.

The forum is an annual event, in which leadership from the various human resource departments within the university system devote the day to serving the community. On this particular day, personnel from the Dearborn campus were unable to attend, but they typically participate as well.

"We learn, we are able to serve, and we are able to come close together on what really matters," said Laurita Thomas, associate vice president for human resources for the University of Michigan. Thomas, who runs and organizes the forum, said the group knew it wanted to travel to Flint and help due to the water crisis.

"It was pretty clear we needed to be here," she said.

On this day, the group spent time on the UM-Flint campus, and also did work elsewhere. At Our Savior Lutheran Church, on N. Saginaw St., volunteers handed out bottled water and water filters to residents, helped out with the food pantry, did weeding, cleaned up trash, and helped fix a swing.

"They were a very eager and helpful group," said Pastor Randy Schultz. 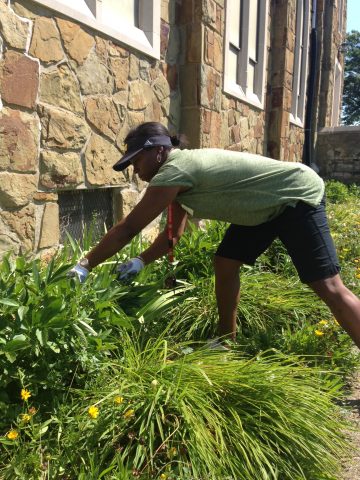 In the Civic Park area, volunteers put mulch down, painted curbs, planted grass seeds, watered plants, picked up trash, and more. And at the Early Childhood Development Center at UM-Flint, a crew worked with the children on several projects, and walked with them to the Flint Farmers' Market as the youngsters learned about nutrition.

The entire group also took a bus tour of Flint.

Beth Manning, director of human resources at UM-Flint, said the annual event further unifies the campuses, and builds relationships between the peers. It also allows the group to learn about the vibrant nature within the broader community.

A day in which she physically contributed to the lives of Flint residents. On this day, she traveled to Flint from Ann Arbor with a bus of her colleagues in leadership roles within human resources at the university.

Jenkins-Ali said the impact of the service extends beyond the actual day.

"I get to bring that caring feeling back," she said.