The dean of the University of Michigan-Flint School of Health Professions and Studies was invited to The White House to attend an event to commemorate the 20th anniversary of the Americans with Disabilities Act (ADA). 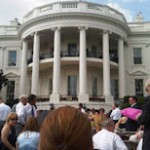 "The Americans with Disabilities Act is the greatest civil rights legislation for more than 50 million Americans who now have the opportunity to participate in society like everyone else – work, play, shop, and vote," said Kornblau. "And as our population continues to age, we have work to do to meet the need for services and supports for people with disabilities."

Kornblau was recently appointed to a committee by Health and Human Services Secretary Kathleen Sebelius to review and update the criteria used to define medically under-served areas and health professional shortage areas.